PCR Testing Is the Future of Treating UTIs During Pregnancy

Urinary tract infections (UTIs) are the most common bacterial infections encountered by primary care physicians in the United States, accounting for approximately 7 million visits and $1.6 billion in cost annually.19, 29 Because of the shorter length of the female urethra and its proximity to the rectum, UTIs are more common in women than in men—accounting for 84% of visits.13, 19 Fifty to 70% of women will have a UTI sometime during their lifetime, and 20 to 30% will have a recurrent infection.2, 14 Known risk factors for developing uncomplicated and recurrent cases of UTIs include sexual intercourse, use of spermicides, a previous UTI, a new sex partner, and a history of UTI in a first-degree female relative.19 Changes in the normal vaginal microbiome have also been recently identified as an important risk factor for UTIs.26

The prevalence of UTIs increases with age and affects 20% of women over 65 years, which is twice the prevalence in the general population.7 Pregnancy and diabetes mellitus (DM) are also associated and have an increased risk of both first-episode and recurrent UTIs, with recurrence defined as three episodes of UTI in the last 12 months or two episodes in the last 6 months. UTIs during pregnancy may also increase the risk of preeclampsia.38

UTI is also the most common bacterial infection in children and is often associated with the presence of anatomic abnormalities. Nonetheless, the diagnosis of UTI in children is often hampered by the diversity of symptoms that can range from irritability to fever and vomiting. In this young population, encopresis—soiling of underwear with stool—is associated with recurrent UTIs.30

Hospital- and healthcare facility-acquired UTI also represent significant health and economic burden. Compared with individuals who develop community-acquired UTIs, those in healthcare settings such as nursing homes are more likely to be older, to have more co-morbidities, and to have been previously treated with antimicrobial agents.1 Hospital-acquired UTIs, which are predominantly linked to the use of urinary catheters, are often polymicrobial and are more frequently caused by multiple-drug resistant uropathogens.20

UTIs are generally classified as “uncomplicated” and “complicated.” Traditionally, uncomplicated UTIs comprise episodes of acute cystitis in healthy, non-pregnant women who have no history of urinary tract abnormalities, immunocompromised disorders, or signs of systemic infection.19 More recent classifications have expanded the list to include cases of acute uncomplicated pyelonephritis, asymptomatic bacteriuria, and recurrent uncomplicated UTIs in this category.25

By default, all other UTIs are classified as complicated and refer to infections that occur in men, pregnant women, immunocompromised patients, or those who have an anatomical or functional abnormality of the urogenital tract (for example, individuals with renal stones, urinary catheters, neurogenic bladder, spinal cord injury, and renal transplantation).

Common symptoms of acute cystitis include frequency, dysuria, suprapubic pain, and hematuria. Uncomplicated cystitis is extremely rare in young men, while in elderly men, even though symptoms of acute prostatitis, such as frequency and dysuria, can be misdiagnosed as UTI, urinary-tract obstruction resulting from prostatic edema can increase the risk of UTI.13

The prevalence of asymptomatic bacteriuria (ASB), defined as a positive urine culture with at least 105 cfu/ml collected from someone without symptoms, is reported to be between 1-5% in healthy women, 12-26% in women with DM (also increased in men with DM), and over 20% in the elderly.13 However, treatment of ASB is generally reserved for specific populations at risk for serious complications, such as renal transplant patients and pregnant women.13, 16, 23, 27 During pregnancy, ASB is associated with an increased risk of preterm delivery and a 20 to 30-fold increased risk of pyelonephritis; furthermore, antibiotic treatment of ASB has been shown to significantly reduce these risks.35

The presence of Group B streptococcus (GBS) in the urine of pregnant women indicates vaginal colonization and, therefore, also warrants treatment. GBS is the leading cause of morbidity and mortality among infants in the United States and results from vertical transmission from mother to newborn in utero or during passage through the birth canal.34 There is no diagnostic threshold for GBS to be treated. The 2002 recommendation from the CDC stated that: “clinical microbiology labs should report any concentration of GBS detected in urine (of pregnant women).”

In cases of complicated UTIs, UPEC is followed in prevalence by Enterococcus species, K. pneumoniae, Candida species, S. aureus, P. mirabilis, P. aeruginosa, and GBS.11 Enterococci are rarely associated with community-acquired UTI but play a prominent role in the pathogenesis of catheter-associated UTI and are among the main pathogens isolated from polymicrobial infections on the surface of indwelling urinary catheters and biliary stents.9, 10, 24

There are also several emerging, rare, misclassified, and otherwise under-reported Gram-positive pathogens of the urinary tract including Aerococcus, Corynebacterium, Actinobaculum, and Gardnerella.24

Polymicrobial UTIs often involve one or more Gram-positive bacteria that have also been shown to influence the pathogenicity of co-infecting organisms; furthermore, many of these pathogens can be easily overlooked by routine diagnostic methods.24

Several other diagnostic methods have both advantages and disadvantages (Table 1).36 These include: 1) dipstick, a quick method that helps identify UTIs caused by Gram-negative bacteria, but less useful for Gram-positive pathogens, especially in pregnant women and in the elderly24 2) Urine microscopy Gram-stain; 3) Immersion culture; and 4) Algorithms, where a diagnosis is based on meeting a certain number of criteria.33 In addition, new and emerging technologies are under current development.8

Tests with low specificities that lead to a high rate of false positives contribute to unnecessary prescriptions and increase the risk of resistant pathogens. 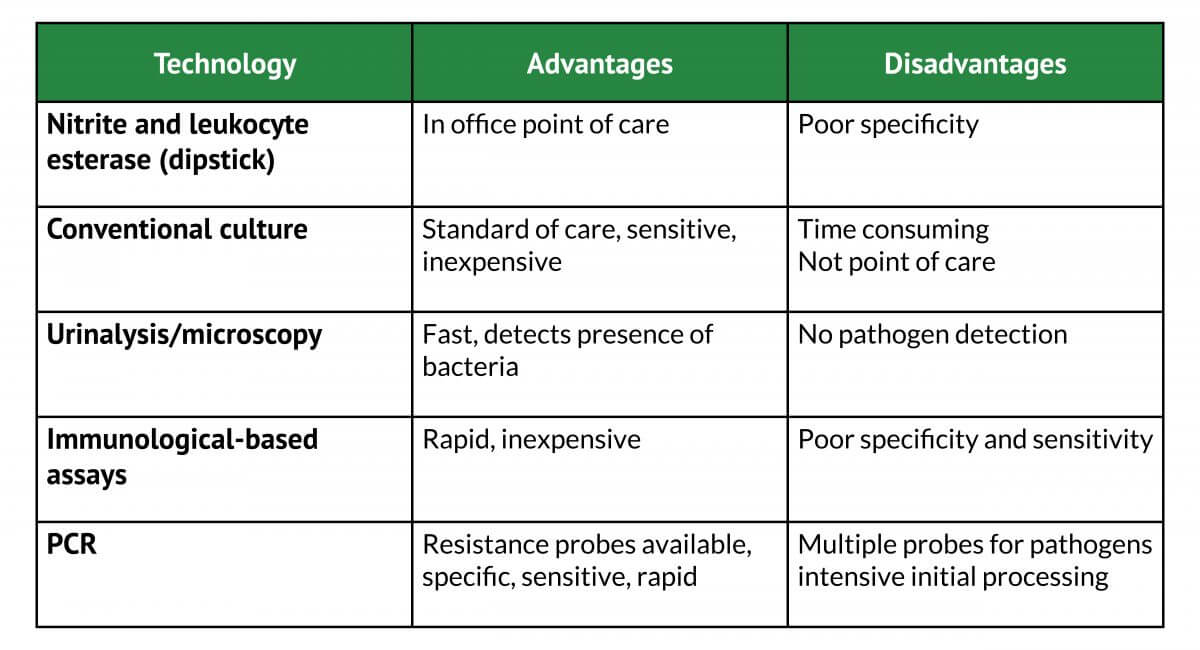 The Problem of Antimicrobial Resistance

Currently, antibiotics such as trimethoprim, sulfamethoxazole, ciprofloxacin, and ampicillin are the most commonly recommended drugs for treating UTIs.11 However, increasing rates of antibiotic resistance and high recurrence rates are steadily increasing the burden on our healthcare systems.

Antibiotic resistance has been well documented for members of the family Enterobacteriaceae, including E. coli and K. pneumoniae. Both pathogens have acquired plasmids encoding extended-spectrum β-lactamases (ESBLs). These plasmids rapidly spread resistance to third-generation cephalosporins among other antibiotics. Other Enterobacteriaceae produce the class C β-lactamases (AmpC enzymes), enzymes that work against cephamycin and third-generation cephalosporins; they are also resistant to β-lactamase inhibitors. The expression of AmpC enzymes is also linked to carbapenem resistance in K. pneumoniae strains.

Multidrug resistance is also common among enterococci, which are naturally resistant to trimethoprim, clindamycin, cephalosporins, and penicillins. Enterococcus species have also developed a high-level resistance to glycopeptides, including vancomycin, one of the last lines of defense against multidrug-resistant organisms.4, 6, 12, 15, 31, 32

Even though antibiotic resistance in S. saprophyticus is uncommon, methicillin-resistance has been found in ~1–8% of urine isolates and appears to be due to the acquisition of a penicillin-binding protein that has low β-lactam affinity encoded by the mecA gene. The majority of S. aureus UTI isolates, which are more common in pregnant women and catheterized individuals, are methicillin-resistant.17, 18, 22, 24, 28

Antibiotic resistance is a global problem that is one of the biggest health challenges facing medicine today. In March 2020, the Center for Disease Control (CDC) and Prevention launched a National Action Plan to slow the emergence and spread of resistant bacteria (Tables 2 & 3). This multi-strategic plan includes heightened surveillance, education, and preventive measures, the development of new therapeutics such as vaccines, as well as the development and use of rapid and innovative diagnostic tests to identify and characterize resistant bacteria. Improved diagnostic accuracy and characterization of antibiotic resistance of common UTI pathogens is an important strategy that will reduce the overuse of antimicrobial prescriptions and slow the emergence of resistant pathogens. 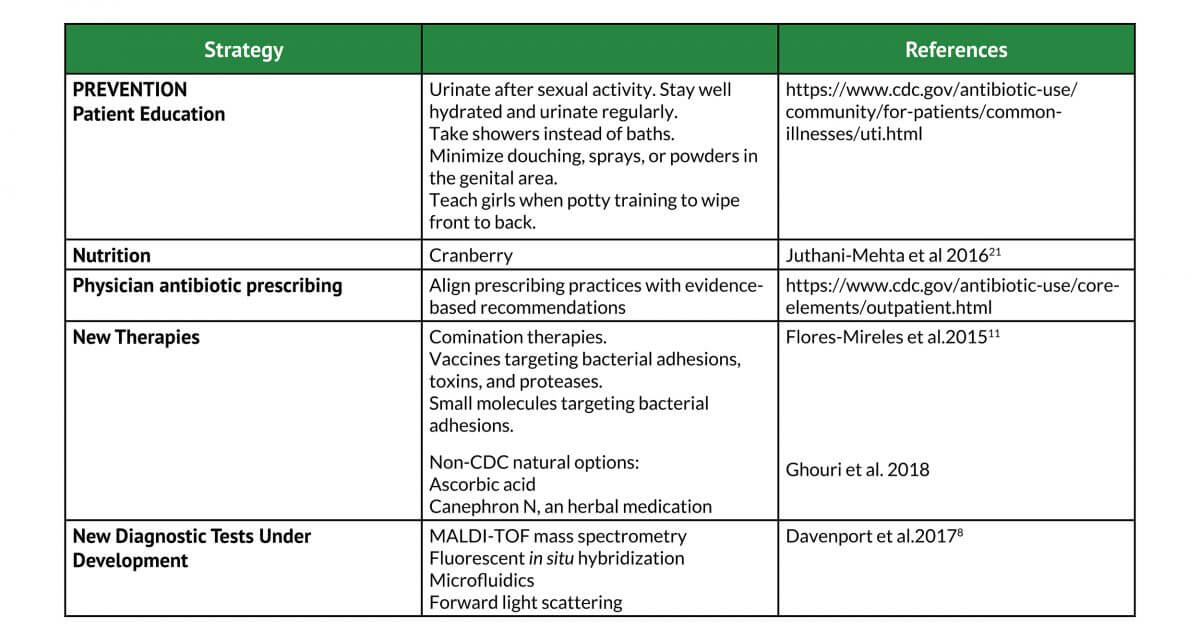 At Assurance Scientific Laboratories, we provide accurate, comprehensive PCR assays for the detection of a wide range of UTI uropathogens. In addition, we offer selective antimicrobial resistance profiles to help clinicians better target therapies in an effort to reduce the use of broad therapeutic regimens that contribute to the growing threat of antibiotic resistance.

Laboratory test results should always be considered in the context of clinical observations and epidemiological data (such as local prevalence rates and current outbreak/epicenter locations) in making a final diagnosis and patient management decisions. With any test, the possibility of false positive and false negative results should always be considered, and the impact on patient management decisions and clinical outcomes should be carefully weighed.

PCR Testing Is the Future of Treating UTIs During Pregnancy